smoke me a kipper, i’ll be back for breakfast

Minor spoiler alert! Eventually this post is going to get around to talking about recent Stargate activity. If you hate people talking about stuff before you’ve seen it and aren’t fully up to date on the Stargate universe (all ten seasons of SG-1, all four current seasons of Atlantis, and Ark of Truth), you might want to wait on reading this until you catch up.

Like everything else on my blog, what follows is my opinion. You aren’t required to agree with me, and in fact, as long as the post is articulate and polite, hearing from people who don’t agree with me can be much more interesting than hearing from people that do. I’m not really a comment hound, but everybody likes to have their thoughts acknowledged.

A few years ago, we had DirectTV installed because they had a good introductory deal with Qwest. A year later, the rate went way up and we had it disconnected. When we did that, we never got around to hooking up the antenna in our attic. The kids stopped vegging on mindless TV, now they veg on mindless videogames, websites, email, and even books.

Earlier this month we bought a new LCD HDTV (Sony KDL-40V2500) and HD rabbit ears, so we are once again learning what TV commercials are, but even with the new television we don’t see nearly as much of live TV as we used to. The TV spends much more time on the Video 6 input, which due to limited character space I have labeled “COMPY.” We had it mounted on the wall in our front room right above the computer desk, and thanks to the miracle of a DVI to HDMI adapter, we have a second monitor for the computer with 1080p resolution. All the cables except the power cord are in the wall, and we have a plan to get that in the wall too. The computer monitor in this picture is a 20.1 inch ViewSonic VG2030wm. 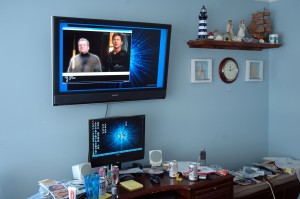 Ever since we lost the ability to watch live TV, but especially in the last year or so, we have been watching TV shows in ways that do not involve a television set. We were finding ourselves mystified by pop culture sci-fi references made by our friends, so we watched all ten seasons of SG-1, all four seasons of SGA, all four seasons of Farscape, Firefly, Serenity, and many other shows by finding them online, either for download or in some kind of streaming format. We watched all five seasons of Babylon 5 on borrowed DVDs, and at some point in the future will be watching all the B5 movies the same way.

Now for the Stargate spoilers I mentioned. I was entranced by the original Stargate movie. When SG-1 came out, I knew that it existed but never really watched it. A few days ago Netflix sent us Ark of Truth, and last night we watched the season finale of Atlantis.

Ark of Truth was really good. It wraps up the Ori storyline, something that needed to be put to bed. Although they had a bigger budget for special effects and nice sets, and certain scenes were paced slower like a movie, it didn’t come across like a movie when I was watching it. They didn’t change the overall feel, they just made it bigger. Contrast that with Serenity and Firefly, where Joss Whedon went completely into blockbuster movie mode. I enjoyed Serenity immensely, but there was a little bit of culture shock in how much things changed from the series.

Stargate Atlantis is a whole separate discussion. It’s easily my favorite part of the Stargate universe. The Wraith are a much more believable and menacing bad guy than the Goa’uld were, and they’ve assembled an awesome cast. When they killed off Carson Beckett (which actually happened many months before we saw the episode), my wife was beside herself. The actress who replaced Dr. Beckett was much better as Kaylee on Firefly than she is in Atlantis. The way they brought Carson back could have been done better, but we have high hopes that the storyline will redeem itself and he’ll be back next year as a regular character.

I have one thing to say about the Atlantis season finale, illustrated on the TV in the picture above. The idea of a man being sent far into the future with only a hologram of his annoying friend for company is not exactly original. All the scene above needs is an H on Rodney’s forehead.

3 responses to “smoke me a kipper, i’ll be back for breakfast”