but not a real green bike, that’s cruel

Okay, so it’s more yellow than green… but that wouldn’t be nearly as amusing.

Thanks to some recent purchases, the bicycle portfolio now includes everybody but Melanie, who refuses to learn to ride one. We have offered to buy her a bike and teach her to use it, but she has so far turned us down, and since she’s only here on weekends, we don’t get a lot of time to wear down her resistance on the subject. When the weather gets a little more stable, I will take the adult bikes in for a tuneup and go on a family bike ride. 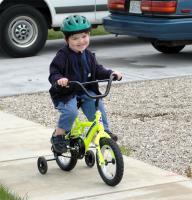 This is only the second time I have taken him outside to ride it. The first time was a few days ago. On that outing, he had a lot of trouble figuring out what to do with the pedals, activating the brakes as often as going forward. Today he really picked up on what to do … I no longer need to push him, and when he remembers to do it, he can stop himself. He’s become quite the speed demon, going faster than his other skills (like steering) can handle. There were several crashes, but thankfully no damage was done. I think he’ll need the training wheels for a while, but I am impressed both by his progress and the intelligent engineering that has resulted in an intuitive machine like the bicycle.

Check out the logo on his shirt. While I was on campus in North Carolina last year, I picked up souvenirs for the kids. 🙂

2 responses to “but not a real green bike, that’s cruel”

This site uses Akismet to reduce spam. Learn how your comment data is processed.