Knowing that food is expensive in Disneyland, Kathy and I loaded up on a protien-oriented breakfast so that it would really last. The kids all ate mostly carbohydrates, despite our dire warnings about going hungry until lunchtime to encourage otherwise.

After breakfast, we went back up to the room and proceeded to get everything ready. We brought snacks, water bottles, sweatshirts, and my fancy (heavy) new digital camera with its brand new (heavy) telephoto lens.

February is off-peak time for the park, so they are only open until 11:00 PM on weekends and holidays, and 8:00 pm on normal weekdays. Kathy’s good friend had told us that this was the best time to go to Disneyland because hardly anyone is there. We would learn over the course of our day today (Sunday) that this does not apply to weekends and holidays.

Our first lesson in a crowded day was the 9:30 AM shuttle to the park. The shuttle that the hotel uses is a big tour bus, and the hotel is the second of three being served by this bus. The first hotel on the stop is bigger and has many more people that use the shuttle, so the bus was already packed when we got on. We ended up standing in the rear of the bus for the 10 minute trip.

The part of Disneyland that is used as a shuttle drop off has several zones, each with a specific color, like Red, Blue, Yellow, Green, and so on. We discovered that the Green zone, which was closest to the outside gate of the parking lot, was being used to shuttle employees to work. Homewood Suites must spend a fortune on their breakfast, because they don’t have anything left to hire a decent service to Disneyland. We were dropped off at the White zone, outside the gate. Only taxicabs and city buses are forced to park further from the actual park entrance, and that’s only by about 20 feet. I don’t have an exact figure, but I would say that it is probably 1/3 to 1/2 a mile from the White zone to the bag inspection point.

We rented a stroller and proceeded into the park. Kathy fell into the role of designated stuff-watcher and I took the kids on rides. It took about 15 minutes of waiting in line for each ride. Try to imagine those kids who have just been dropped into the chocolate factory being forced to wait for 15 minutes, and then only being able to stuff themselves for a minute or two and then forced to wait again. We got a few pictures, one of which shows me and all four kids on the Go Coaster. 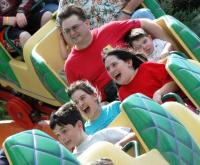 By about 3 PM everyone was tired, cranky, and in some cases, both. We decided to go back to the hotel to let Ben (the three year old) have a nap. We gave back our stroller, walked back out to the White zone, and caught the shuttle. At the hotel, the kids watched Nick Jr. while Kathy and I crashed for about an hour. When we came to, we realized that we were sunburned and dehydrated.

For our second foray into Walt’s playland, we got a little smarter. We grabbed sweatshirts, fanny packs, water bottles, diapers, and Ben’s diabetes kit. Everything else got left behind. The camera spent the rest of the trip in the hotel room, so we did not get any more pictures.

Travelling light was a good thing. We could now leave the stroller completely unattended because there was nothing in it, and we still had our receipt in case someone decided to walk off with it. Kathy now got to actually go on rides and enjoy the park. We went on Small World only once. I don’t think I could handle hearing that song again for more than about a minute without clawing my ears off.

Pirates of the Carribean was really really cool. It’s interesting to see how various portions of the ride were incorporated into the movie. The Haunted Mansion was also very cool, though since I have not seen the movie I cannot compare the two.

At 10:00 PM, there was a show called Fantasmic. This is a combination of stage, animation, and fireworks that was very well done. It featured Mickey Mouse’s dreams, which were very much like Fantasia, being invaded by all the evil witches from various Disney movies. At the end of it, Mickey defeats a dragon, which starts out animated but ends up an actual life-sized fire-breathing animatronic puppet. All the kids enjoyed it. Ben was alternating between telling us how much he liked it and hiding his face from the witches and the dragon.

When we left the park, we had to carry Ben all the way to the White zone because he was just too tired to walk it.